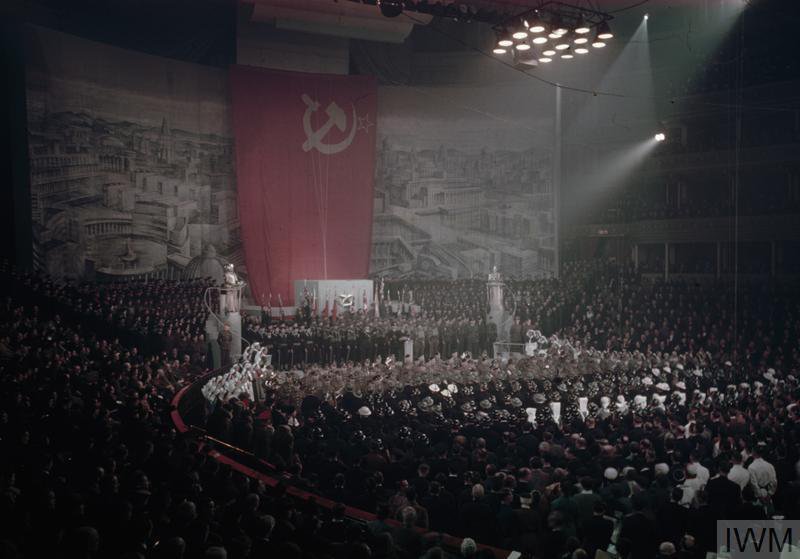 In 1939 the Soviet Union hardly featured in the Ministry’s thinking. There were no experts for it to call on, no agreed policy for the country, and seemingly little interest in engaging with it. The Soviets, though players of a sort in the early stages of the war, were nevertheless not something that the Ministry had felt the need to engage with in any serious way.

By 1943 this had all changed. In February of that year, the Ministry produced a pageant held at the Royal Albert Hall in celebration of the Red Army and the Soviet war effort. In the picture at the top of this post, the Foreign Secretary Anthony Eden addresses an invited audience; his backdrop, a representation of Stalingrad where the Red Army had triumphed over the Wehrmacht.[1] It was a celebration made to underline a common spirit and cause against a common enemy;

“We recognize the spirit of the Soviet peoples as akin to that which filled the hearts of everyone in these islands when, after Dunkirk, the enemy challenged our determination never to submit, though we stood alone.”[2]

Eden’s speech was one of many given throughout the country by officials praising the Soviet effort, and Red Army days were celebrated in Britain and throughout the Empire. And though it was in many ways an honest sentiment, there was a degree of political calculation in these celebrations that stemmed from the first confused months in wake of the German invasion. It was during this time that the Ministry’s policy towards the Soviets emerged, formed around placating its new ally and channeling popular enthusiasm for it amongst the British population away from communist organizations.

After the Molotov-Ribbentrop pact, the Soviet position had become rather murky. Within a few weeks of the German invasion, Soviet troops moved in to eastern Poland, with both powers eventually dividing the country between them. Since war had been declared in defense of Polish sovereignty, this placed the Soviets in an uncertain position relative to the allies. Were the Soviets neutral, or were they an ally of Germany? The latter seemed unlikely, but without a clear idea of where the Soviets stood, the Ministry’s domestic policy towards them remained in a vacuum until the Germans invaded in 1941.

Already by the summer of 1940, the Ministry’s Home Intelligence surveys had picked up a steadily increasing pro-Soviet mood amongst the public. In Nottingham, it was felt that “all sections of public would welcome the Soviets as an enemy of Germany, if not as an ally of Britain.”[3] The widespread hope was that that they could act as a check on German aggression. Yet these sentiments existed at the same time as draft plans were made by the British and French to bomb the Baku oilfields in Azerbaijan, and so deprive both the Soviets and the Germans access.[4] Though wiser heads prevailed, there was still a disconnect between the public’s generally pro-Soviet mood and official sentiment which, where it took any particular form, was far less enthusiastic.

Events would force the issue. In the summer of 1941, the Ministry’s parliamentary secretary Harold Nicolson wrote,

…it seems improbable that Russia will become involved in a war with Germany, yet should such event occur we shall be faced with a grave publicity problem both at home and abroad.[5]

Five days later the Axis powers invaded. This, in Nicolson’s words, ‘strange issue’ was made more troubling by the fact that the Ministry had no Soviet experts, and no section devoted to dealing with the questions that would inevitably now be raised.[6] Alongside issues such as how to maintain production rates (in case workers now slacked off), or countering the idea that victory was now a foregone conclusion, the thorniest question was how to support and discuss a country whose system of government was inherently critical of Britain’s own? A way had to be found to support the Soviet Union without endorsing the system that underpinned it.

This might seem like an impossible problem. But after 1941, the government felt that by supporting official events to celebrate Soviet successes, it could effectively direct support for it amongst the population – which was high – away from events organized by the Communist party in Britain. In effect, Ministry events and publications would neutralize the political nature of the Soviet state and divert the public away from any admiration of its political system. At the same time, it would have the effect of assuaging any Soviet doubts of British support. As the Minister of Information Brendan Bracken later wrote in 1943,

Attention was drawn to the importance of such demonstrations being, if possible, officially inspired, as so many difficulties arise from large-scale ceremonies of unexceptionable purpose but ambiguous parentage.[7]

In the immediate aftermath of the German declaration of war, the Ministry gradually began to adopt its lines to take. The people of the Soviet Union would be praised, but the Soviet state’s ideology would be downplayed or ignored entirely. Where possible, the democratic values that Britain fought for would be emphasized, with both sides drawn together under lines like ‘fighting for the freedom of all peoples.’

These lines were disseminated through the Ministry’s regional structure and to its Local Information Committees, many of which proceeded through the autumn and winter of 1941 to organize Anglo-Soviet weeks - celebrations of understanding, common purpose and cultural exchange that would become increasingly elaborate and reach their apogee in the marches and pageants of 1943.

These early events were not free of problems. The Metropolitan Police’s Special Branch (charged with policing domestic subversion) asked for the use of parades in Anglo-Soviet celebrations to be restricted, which the Ministry quickly agreed to. The image of communists marching cheerfully through the market towns of wartime Britain was perhaps a gesture of comradeship too far.[8]

Shortly after the celebrations in 1943 the Germans discovered the graves at Katyn, where the Soviets had massacred 20,000 Polish army officers, police and members of the intelligentsia. The Ministry’s response was to bar Polish journals published in London from discussing the matter, and asking the British press to limit its coverage of Russo-Polish relations.[9] This marked the highpoint of British willingness to subsume any misgivings about the Soviets in the interests of the Grand Alliance. It is perhaps a testament to the Ministry’s work that after Germany’s defeat, it became clear within the Foreign Office that public discussion about Soviet Union in Britain would need to be reframed, the press and public having taken its lines uncritically for so long.[10]