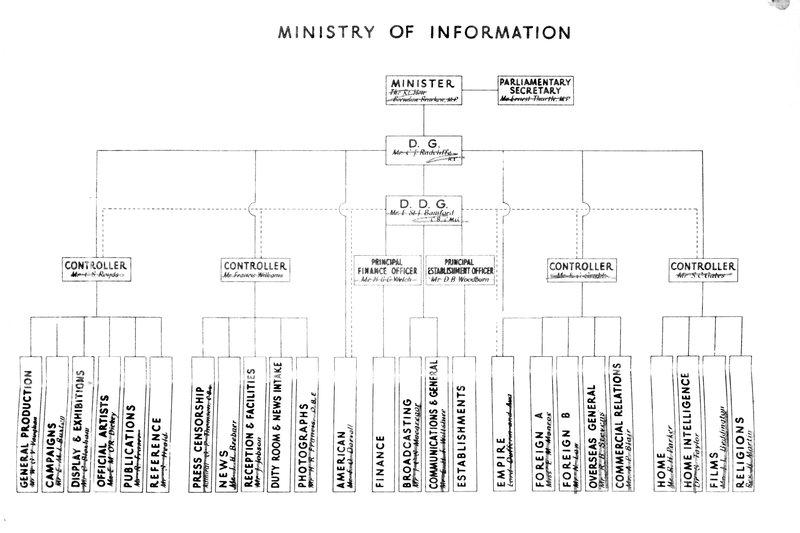 The Ministry of Information was an extraordinary institution that had been designed to undertake a variety of roles. The following post by Dr Henry Irving hopes to provide a brief introduction.

The Ministry of Information (MOI) began work on 4 September 1939. Less than twenty-four hours after Britain had declared war on Nazi Germany, this was the first full day of a conflict that we now refer to as the Second World War.

The MOI was set up to meet the likely challenges of this ‘emergency’. Its main task (as suggested by the ‘Information’ in its name) was intended to be the issue of public announcements and official news. It was also made accountable for producing ‘National Propaganda’ that would maintain morale on the home front and influence opinion abroad, as well as for the control of news and information deemed to be of military value. These functions were matched by a little-defined responsibility for monitoring public opinion, which would make the MOI increasingly accountable for the maintenance of morale.

These would prove to be difficult and sometimes conflicting tasks. Both the responsibility for censorship and the imprecise, but emotionally-loaded, term ‘propaganda’ caused particular problems when applied within a domestic setting. This would ensure that the MOI was subject to sustained criticism during the first two years of the war. However each task had also shaped the MOI as an institution: with its organisational structure reflecting the various jobs assigned to it.

The earliest plans were for a headquarters split into five ‘divisions’. It was intended that the MOI would initially focus its efforts on ‘quick news’. This would be carried out by a ‘News’ division with responsibility for issuing official news to the press and a separate ‘Control’ division with responsibility for censorship. These were to be joined during a second stage by ‘Publicity’ and ‘Intelligence’ divisions. All of this was to be facilitated by an ‘Administration’ division that would grow out of the existing planning staff. Plans for a network of Regional Information Offices aligned to each proposed ‘Defence Area’ were developed separately.

A number of important changes were made to these plans during spring 1939. Historians of the MOI tend to argue that this was a time of unfocused expansion as the number of divisions increased from five to sixteen. Their argument echoes a contemporary belief that the MOI had been ‘wrongly constituted and wrongly manned’ and has been used to explain some of the problems encountered at the beginning of the war (this argument is set out in a previous post). However the immediate pre-war period can also be read as a time of consolidation – with the planners cutting five divisions into four groups.

Take the example of the new ‘Press Relations’ group. This was a combination of the old News and Control divisions and hoped to secure greater co-ordination between the issue and censorship of news. A decision to merge Collecting and Administration into a ‘Co-ordination and Intelligence’ group was taken for similar reasons. Even the transformation of the Publicity division into separate ‘Publicity User’ and ‘Publicity Producer’ groups was motivated by a desire to rationalise. In fact, each change reflected an increasingly detailed planning process, and a growing belief that an official explanation of the war and campaigns to reassure the public would be needed from the outset.

The later history of the MOI is one of the partial dismantling and attempted rebuilding of this pre-war plan. A succession of infamous failings during its first months led to intense criticism and resulted in all responsibility for news and censorship being temporarily removed. However, although the MOI’s administrative history is marked by almost constant change and revision, it is notable that the structure dismantled in 1945 was remarkably similar to that envisaged in 1939 (particularly when viewed according to function).

This is best exemplified by assessing the situation that existed under Brendan Bracken (who is generally regarded as the most successful Minister to have graced the department). Bracken’s ‘Press and Censorship’ was the obvious successor of the 1939 ‘Press Relations’ group that caused so many difficulties during 1939-40, whilst his ‘Production’ and ‘Administration’ groups were also rooted in pre-war ideas. The main change had actually come earlier when  the ‘Publicity Users’ group had been split into separate ‘Home’ and ‘Overseas’ departments during 1940.

Other changes can be explained by context. Thus, as the war situation had become more desperate during the summer of 1940, the MOI’s attention had turned increasingly towards Home publicity; similarly, as the military tide turned in 1942, Bracken expanded Overseas by adding a number of increasingly specialised sub-sections focused on particular geographical areas.

The MOI in 1945 was a composite of the structure envisaged three years earlier and the various revisions that had been made along the way. Its varied responsibilities, and the inevitable difficulties it faced, had encouraged the addition, removal and restructuring of different ‘groups’, ‘divisions’ and ‘departments’. Yet the main difference was that, after six years, the department had been able to find its feet. This was reflected in the findings of a 1944 government audit which noted that the MOI now enjoyed ‘a thoroughness and solidity, combined with flexibility and enterprise which are the hall-marks of administrative efficiency’.

Nevertheless, while this led some to call for the MOI’s activities to be retained as a function of government, the stigma associated with ‘propaganda’ remained. It was for this reason that Brendan Bracken famously urged his department to stop ‘lecturing’ and maintained that it should be wound up immediately upon the end of the war.

The eventual replacement of the MOI by the Central Office of Information (COI) in April 1946 can be regarded as a compromise. The new body demonstrated that public relations would remain but would not be responsible for initiating its own campaigns (it would instead provide technical assistance to individual departments). It was, therefore, a very different institution to that which entered into the pages of history on 31 March 1946.