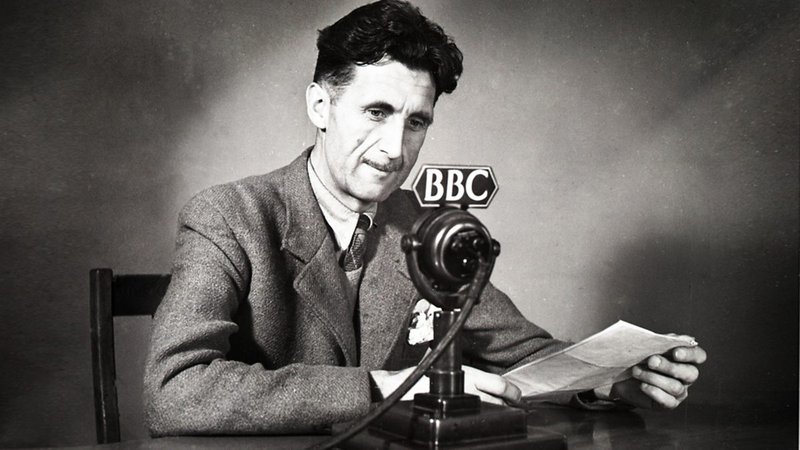 Since the inauguration of President Trump sales of George Orwell’s 1984 have increased by 9500%.[1] At the time of writing it is still at the top of Amazon’s American best seller list. Its current popularity stems in no small part from the new administration’s antipathy to the press – “some of the most dishonest human beings on Earth” according to the President[2] – and Counselor to the President Kellyanne Conway’s use of the term “alternative facts” in defending an intemperate press briefing by White House press secretary Sean Spicer. Such phrases appear to have sparked a renewed interest in Orwell’s book. But what might new readers learn from it?

Written as the wartime Grand Alliance that defeated Germany had long soured, 1984 satirized totalitarian systems of communication and the processes by which history was rewritten to suit the present. Though Orwell had the Soviet Union in mind, and a British tendency to ignore Soviet excesses before and during the war, he drew on his experience of the British Ministry of Information for the book’s imagery and systems. It was a key inspiration for 1984’s Ministry of Truth.

Orwell never really considered the Ministry of Information a bad thing. He worked for the BBC between 1941 and 1943, broadcasting Ministry approved propaganda talks to India, and his wife worked in the Ministry’s censorship division. Though sometimes frustrated with the restrictions the work entailed he still firmly believed in its purpose, and that the Ministry had in fact done a good job during the war. In 1945 he wrote that “[a]ny fairminded person with journalistic experience will admit that during this war official censorship has not been particularly irksome… on the whole the Government has behaved well and has been surprisingly tolerant of minority opinions.”[3] In his resignation letter to the BBC he made it clear he’d never been asked to say anything he wouldn’t have done “as a private citizen”.[4]

What troubled Orwell far more was a climate of opinion in Britain that had gradually smothered dissent over the Soviet Union, of which Orwell had long been critical. After the German invasion in 1941 which brought the Soviets onto the Allied side, dissenting opinions on Stalin and the Soviet system were not well tolerated.[5] What disturbed Orwell most was that publishers, editors and the intelligentsia didn’t need to be pressured by the Ministry to toe the line – it happened by itself, since the consensus was to treat all matters involving the Soviets with kid gloves.

At any given moment there is an orthodoxy, a body of ideas which it is assumed that all right-thinking people will accept without question… Anyone who challenges the prevailing orthodoxy finds himself silenced with surprising effectiveness. A genuinely unfashionable opinion is almost never given a fair hearing, either in the popular press or in the highbrow periodicals.[6]

The trouble with this passage is that in today’s context it can apply to both to the right and the left’s view of what’s become known as the establishment and mainstream media. Those who’ve bought 1984 in the wake of Trump’s victory might largely be liberals and leftists, but the thoughts that led Orwell to write it are ones echoed in libertarian media and in the rhetoric of the new administration and its advisors, which has railed against a perceived consensus. This can be of little comfort to new readers of the book.

If readers are looking for lessons in 1984 then what can they be? In the book history is a tool of power, where the record is constantly rewritten. Inconvenient facts are erased and new ones are added to suit the purposes of the present. Orwell had in mind the erasure of Trotsky from Communist accounts of the revolution, and from Ministry of Information sponsored celebrations of the Red Army and the Soviets during the war. Given the current alarm over ‘post-truth’ and fake news, perhaps it is a renewed emphasis on facts and evidence that we can take from 1984. Several years ago the historian Richard Evans argued in his book In Defence of History for a forceful rejection of attempts by postmodern historians to challenge the idea of ‘truth’ in history. Last week Evans linked statements by Conway and Spicer to such approaches within academia, conflating ‘post-truth’ with postmodern. Whatever the merits of this rather hostile reading of postmodernism, Evans’ key point – that facts matter, are discoverable, and are indelible provided we are vigilant – rings true now. When the White House released a statement commemorating Holocaust Memorial Day it came in for severe criticism over its failure to actually mention the Jewish people, eliding all victims of the Nazis and failing to acknowledge the Holocaust as a specifically Jewish tragedy.[7] What might have been dismissed as clumsiness from another administration was, in light of enthusiasm among the far right for Trump’s victory, given greater scrutiny. If 1984 has a lesson for its new readers, it is to beware the ‘memory holes’ in a post-truth age.

[3] George Orwell, 1945, 'The Freedom of the Press', The Orwell Prize [https://www.theorwellprize.co.uk/the-orwell-prize/orwell/essays-and-other-works/the-freedom-of-the-press/]